Today is the first day of spring, and much to our delight the girls and I saw our first robin in the maple tree out front! The girls saw him first and ran into the house to tell me. I grabbed my camera and followed them to the driveway. At first the robin was a bit shy, almost just a silhouette hiding in the shadows.

But then he must have realized the honors and title we were bestowing upon him as First Robin 2014. He moved to a closer branch in the sunlight and started to chirp, “Cheer-up Y’all!”

And then he hopped to an even closer branch, turned his body, and posed for a perfect profile shot. What a dear! 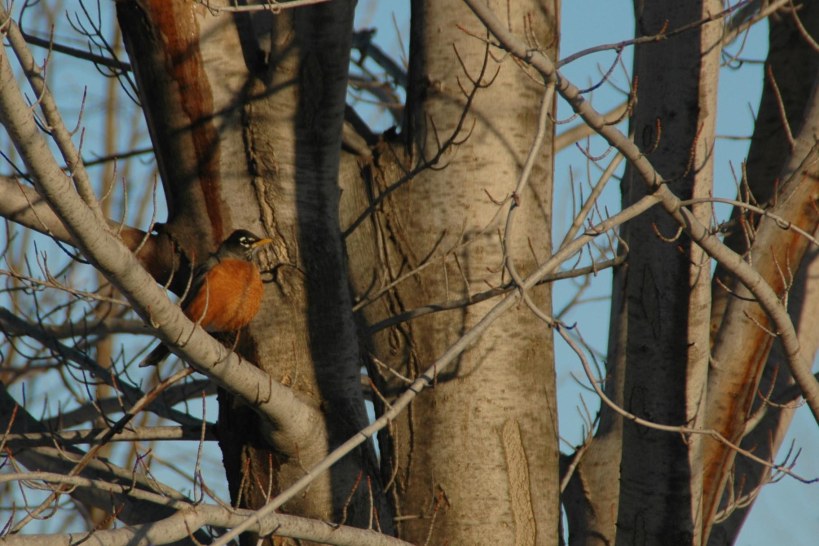 A robin that perches long enough for me to grab my camera and document the monumental occasion — that’s a winning robin, indeed. I don’t ask much. So this year’s First Robin really set the bar (branch?) high for next year’s contest.

To be clear, we had caught a brief glimpse of a robin high up in a tree in the next-door neighbor’s yard a few days ago. But of course that didn’t count as an official sighting in our tradition. To be official, the First Robin must be in our own yard. We’re rule-followers, you know, and every contest must have its official rules. Once the First Robin appears, we commence the planning of the Annual First Robin Tea Party.

The robin sighting this evening topped off quite a lovely day, part of which was spent at the Arboretum, exploring the tapped maple trees there and soaking up the sunshine ourselves. But that’s a story for another day.

In the meantime, it’s officially spring! And the First Robin 2014 says to tell you, “Cheer-up, y’all!”