This week a certain lovely and talented person I know and love in Oregon has been sharing beautifully colorful photos of Lenten roses in bloom, budding camellias and other lush greenery currently abounding in her Secret Garden-like backyard.

I might have been a little jealous when I saw the first ones. In fact, two flower-loving small people in my family (who sometimes peer over my shoulder while my laptop is open) frowned jealously, too.

Spring doesn’t officially begin for another two weeks. But here in the Can-You-Believe-the-Weather-Channel-Says-Our-Winters-Are-Officially-Colder-than-Anchorage-Alaska? city of Minneapolis, we are ever so watchful and hopeful for spring. 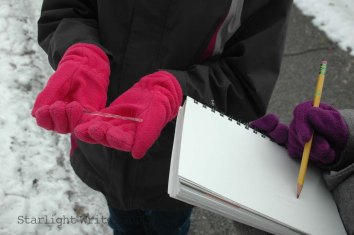 You see, we’ve had more than 50 days of subzero weather and more than 60 inches of snow over the last 90 days. That translates into the worst winter in the history of ever. Or 146 years, if you prefer numbers. To say we are more watchful for spring than ever before — well, that might be an understatement.

Springy-ish Sign #1: The ice house is in my driveway. More than a week ago, state law forced the ice houses to leave the lake. And so what if the ice on the lake is still four feet thick? February is officially over.

Springy-ish Sign #2: The mailbox is becoming more accessible. It has been weeks since the post office threatened to stop delivering our mail because of the snow-plow-induced glaciers at the end of our driveway. And now my 8-year-old can reach the mailbox again.

Springy-ish Sign #3: A photography trip to the Arboretum is not entirely unreasonable. Yesterday it warmed up to a breezy but balmy 20 degrees (never mind the wind chill), so the girls and I threw on our snow boots (again) and ventured out to the Arboretum for a peek at the gardens. It is helpful to have some early March photos as a first reference point in the miracle of spring.

Springy-ish Sign #4: Piles of snirt (aka “dirty snow”) prove there hasn’t been much fresh snow lately. And yes, we’ll just ignore those people who loudly crow, “But March is often our snowiest month!”

Springy-ish Sign #5: Not one of the benches at the Arboretum was vacant yesterday. Yes, it was strangely quiet at the Arb, just us and the turkeys, to tell you the truth.

But even so we couldn’t find a single bench to sit on. 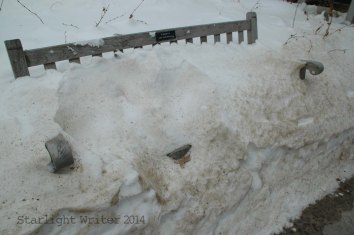 Can you even find the bench beneath this magnolia tree? 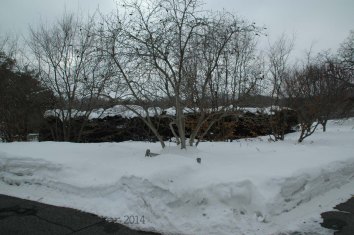 Springy-ish Sign #6: The tips of the magnolia branches show some promising fuzziness. Seriously, this is one of our favorite magnolia trees. I will return to it for more pictures when it blooms.

Springy-ish Sign #7: Puddles! Near the magnolia, we found a few puddles of melted snow. Real-live, honest-to-goodness liquid water in the great outdoors! So what if we haven’t heard raindrops since last October? Puddles are puddles.

Springy-ish Sign #8: “Look, Mommy! I found something GREEN!” It’s buried so far beneath the snow we can’t even begin to identify it. But yep, whatever it is, it’s green, sure enough. 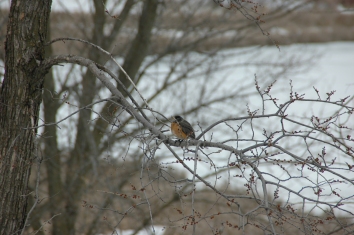 Springy-ish Sign #9. My friend says she saw a robin earlier this week. Rumor is some robins winter in Minnesota. (Gasp!) But Ruth is a robin expert, and she says the robin she saw was most certainly not one of those robins, which are known to look frumpy and crabby and have legs and beaks darkened from frost bite.

“The robin I saw this afternoon was from down south. She had tan legs and a tan beak, and she was wearing flip flops,” Ruth reports. “There was a spring in her step and a sparkle in her eyes. She also chirped a little slowly and had a southern drawl: ‘Chyyuurp, Chyyuurp, y’all.'”

And so there you have it, folks. It’s officially springy-ish in Minnesota!

2 thoughts on “Turkeys, Snirt and Springy-ish-ness”